I know it has been a while since I have added to the list of my new found treasures, but this gem was well worth the wait!

As a member of the Planning Committee for the 2014 Ottawa Gala, I was lucky enough to be granted VIP status for the event which was held at the Canadian War Museum on April 26th. One of the perks this status granted me was access to the VIP Room, where they were serving these guest complimentary drinks and delicious vittles for the first part of the evening.

One of these amazing treats was the Canadian War Museum’s  swanky version of Shepherd’s Pie. 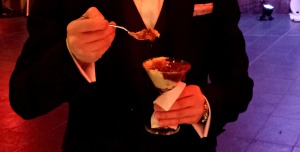 This is one of my fellow Committee members modelling this swanky version of Shepherd’s Pie served at the 2014 Ottawa Gala! How do you say no to a treat like this served in a martini glass! All I could say was mmmmmmmmm!

My mouth was watering once I saw a fellow Committee member with one, so I knew I had to snap a shot of this delectable dish! When I finally got a chance to get one for myself, I was so enamored with this dish, that I gobbled it up before taking a shot of it on its own! It is simply whipped potatoes with some of its peel with pieces of sliced beef in a savoury gravy!

Let me tell you, Readers, it was heavenly! If you are ever thinking of having an event at the Canadian War Museum, ask if you can have this sumptuous snack on your menu! Your guests will thank you!

If you are a fashionista, you are going to love this post! I came across this latest new found treasure while going through all of the blogs I follow called A Stairway to Fashion.  It is one of the shoes from Miu Miu’s New Heel for Fall/Winter 2014 Collection.  I just love it! It’s my favourite one out of the ones shown from this collection.  It’s chic and unique.  It’s also such a fun shoe to look at! 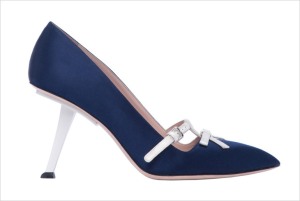 I love fashion, and shoes are a secret passion of mine! If had my way I would have a walk-in closet, and a large portion of it would be devoted to shoes.  There would even be shoes on display in there that I wouldn’t wear because I feel that they’re too good for me to sully outside of the house because they are works of art.  That is how I feel about this collection.  They are gorgeous show pieces, and I had to share this one with you!

I really have to thank the fashion blog A Stairway to Fashion for first showcasing this amazing collection! It is one of my favourite fashion blogs to follow, and there is  so much to look at lust over. It is really an amazing blog to read.

This new found treasure I am sharing with you was sent to my boyfriend/partner. This video is of of a Chinese student in Taipei, Taiwan playing a sheng (an ancient woodwind instrument) during a music concert. Gamers and Mario fans will especially like all of the sounds from this gaming franchise she is able to play. It’s a really fun video to watch! Click on the link above to view.

I hope you enjoyed my latest new found treasure!

I have been sitting on my hands, waiting for ABC’s new show Resurrection to premiere, and it finally did last night! Some of the big names starring in this series premiere are Omar Epps (House), Kirkwood Smith (That 70’s Show), Frances Fisher (The Lincoln Lawyer), and Landon Gimenez.

What is this show about, you ask?  Well, an 8 year-old boy awakens in a rice patty in China.  He doesn’t know who he got there, but he know that his name is Jacob, and that he is from Arcadia, MO.

He’s turned over to Immigration Officer, Martin Bellamy, who then took it upon himself to bring the boy home to his family.  When Bellamy speaks to Henry and Lucille Langston, Bellamy discovered that the Langston’s son had died 32 years ago.  The Langstons then meet the boy Bellamy has brought upon their doorstep and see that he looks and acts exactly like the boy they believed was dead.  Later on in this pilot episode, another character’s loved one returns from the dead.

What do all of these “reappearances” mean? Are these people really who they say they are,or are they shadows of who they once were?

This show forces you to think about what you would do if you were in this situation.  What would I do? I’m so on the fence with a response. All I would want to do is reach out to this little boy and take him in and love him.  At the same time, there would be that little part of my brain that would be nagging at me, reminding me that I saw this person’s dead body, cold and lifeless. How could this be real?  This, Readers, is why it is my new found treasure!  This show makes you question yourself about whether or not you would believe what you were seeing with your own eyes when you know it shouldn’t be true.  Biologically, Jacob Langston is Henry and Lucille’s son, but how did he come back from the dead?  Well, you’ll have to stay tuned to Resurrection to find out what really is going on!

Here is a trailer from the show so you can see what I mean (courtesy of ABCNetwork – YouTube):

On another cruise around the Internet, I found this feast for my eyes! Foodgawker.com is a site that shows beautiful pictures of some amazing looking food.  It ranges from baked goods to raw foods, appetizers to entrées, this site is a foodie’s paradise!

If you’re a lover of food, or if you have a free moment during your workday, you should check out foodgawker.com!

I hope you enjoyed this new found treasure of mine!

I found this new blog while I was working this afternoon.  I started reading it, and it was hilarious!  It’s called “Post-It-Notes From My Idiot Boss.”  It’s an insightful blog that just about anyone can relate to.

John, the voice behind this blog, posts the Post-It-Notes his boss leaves for him on his desk.  With a bit of an explanation from John, you see just what John has to put up with while he is at work everyday.

If you are looking for a quick pick-me-up and you’re near a computer or your mobile device,  click on Post-It-Notes From My Idiot Boss to make you smile!

Thanks, John, for coming up with this blog and for including us into your world with your boss!  🙂