Ever since my family moved into our neighbourhood, I have been compelled to visit the Hintonburger, a old school burger joint that makes everything hand-made and on-site, and likes to deal with local vendors for a lot of its products.  All I have heard from my neighbours who have dined there have raved about how great it was.  As well, it has won the “Best Burger in Town” award for 2012 by readers of the Ottawa Citizen (one of the major newspapers in Ottawa, ON), so I made a plan to go to the Hintonburger with my little ones to see what all the hubbub was all about.

Here it is in all its glory! It’s a converted KFC, if you’re wondering why it looks so familiar.

Once we got there, we saw we were not the only ones who had the same idea to grab some burgers.  It is a small restaurant, but it was packed, with patrons waiting outside the door to place their order (the green fiat is blocking the line)!  We also visited on a night when the restaurant was running under new management with new prices and a new system of doing things.

Once we placed our order, we took a seat outside to wait for our food to be prepared.

This is where we would have sat if we had we dined al fresco. 😦

About ten minutes later, the skies above us told us dining al fresco would not be an option.  We got inside and got a booth just in time before the heavens opened up, rain coming down, washing out the streets of Hintonburg. 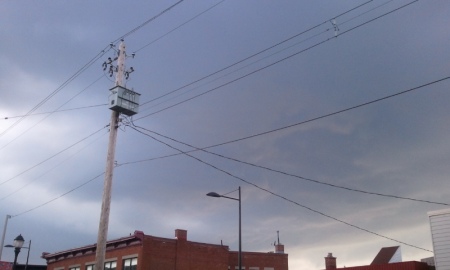 This pic was taken about 10 mins. before buckets of rain fell.

Yay!  Our food had arrived!  I ordered two Wellington combos (two 6 oz. burgers with small fries and two cans of pop) along with another order of fries for the kids.  You’ll only see my order as my eldest was a ravenous thing, tearing into her meal as though she had eaten in weeks.

Here it is! My 6oz. burger, fries and drink. Sorry I didn’t display the fries better. I had my little guy on my lap, and he was reaching for everything!

As we shared our meals with the little ones (it doesn’t look it, but there was enough to do so, and they would also be getting something healthier when we got home), we all agreed that these burgers were living up to the accolades it has received.  The burger wasn’t overdone.  It was simple and to the point.  The bun seemed as though it was a normal bun you can buy from the grocery store for your own home barbeque; not huge with some sort of grain sprinkled on top to take away from the taste of the burger.   The patty wasn’t too thin or too thick, and it was so good to chow down on!  Not greasy, but not dry.  Dare I say that the meat was soft?  Not in a bad way, but it wasn’t crumbly, as though it was overdone, or kept warm under a heat lamp.  The fries tasted good, too.  They were lightly seasoned, and really fresh (it took me a while to cool them down for my kids, they were so fresh).

By the time we left, customers were still filling up the joint, in spite of the weather.  We made a mad dash to take public transit home, so the little ones weren’t in the rain too long.  I’m still thinking about those burgers, and plan on making a trip back to the Hintonburger soon.

I would rate the Hintonburger a 4 out of 5.  This is based on the delicious and fresh food I received.  Why not 5?  Well, at the time this review was written, there is no real notice or advertising to let the public know that you can call ahead for a take-out order.  This way,  all you would have to do is show up and pay instead of waiting for 20 minutes after waiting a while in line just to order.  There was a notice in the restaurant, just not anywhere else for those not used to visiting the Hintonburger.

So, if you ever come to Ottawa, and you’re in the mood for a good burger, hit up the Hintonburger.  You won’t be disappointed!